Beverley is located in East Yorkshire, England. Though overshadowed by York, 30 miles to the northwest, Beverley is home to a number of medieval buildings and sites.

Beverley is also 10 miles south of where I lived in England. I visited quite often, volunteering at a charity shop, researching my thesis in the Minster and library, and shopping along Toll Gavel. I even chose it as the setting for my first novel, The Stonemason’s Secret.

Prefer to listen? Click below for an audio version.

Beverley in the Middle Ages

Beverley was founded ca. 700 CE by John of Beverley, Bishop of York. It began as a church and monastery, which John retired to until his death in 721. It is John’s relics were placed in the monastery and after his canonization in 1038, his tomb became an object of veneration, drawing pilgrims to the growing town that developed nearby.

By 1377, Beverley was the 11th most populated town in England, about half the size of York. The main industry was the cloth trade with Beverley cloth, a woolen cloth made entirely in town, exported to Spain and Flanders. Wool was also traded with cloth-making towns in the Low Country. The cloth trade supported other related trades: dyers, weavers, shearmen, and fullers. Tanning and brick-laying also flourished by the late Middle Ages, and there was a prosperous guild of minstrels in town.

The most prominent feature in Beverley is the Minster, officially known as the Church of St. John the Evangelist.

The original church founded by St. John of Beverley was destroyed and was re-founded in the 10th century as a collegiate church. That church was enlarged and added to through the centuries until a fire in 1188 swept through Beverley and damaged the building. Rebuilding began in 1190, then the central tower fell in 1213 damaging the choir and adjoining areas of the transept. Rebuilding began again in 1220; the Minster as we know it today was the result.

Among the construction highlights:

The completed Minster measures 330 feet in length, making it ¾ the size of York Minster. It also follows the same plan as York, with a main transept, secondary transept in the chancel, an octagonal Chapter House (destroyed in 1550), central tower (which fell with the stub remaining) and two towers on the west facade.

The most significant medieval decorations in Beverley Mister are the 76 figures of medieval musicians spread throughout the building. While many of the figures and instruments have been damaged or restored, they still represent the largest collection of carvings of medieval instruments in the world and are a great resource for scholars.

The figures can be seen as follows:

Other interior decorations to note:

St. John of Beverley’s tomb is marked on the floor of the nave with a small plaque.

Norman font that survived the 1188 fire is located in the south aisle.

There are also two medieval tombs to see. The plainer 14th century Two Sister’s Tomb located in nave south aisle near the font and The Percy Tomb on the north side of the choir. Constructed in the 1350s, it is considered one of the finest examples of stone carving at the time. Like the Two Sisters Tomb, it features an ogee arch in the canopy above. Perhaps most amazing, the Percy Tomb survived the Reformation without damage.

Great East Window – The tracery of the Great East Window is from the early 15th century when it replaced the earlier window. All the medieval stained glass that has survived is in this window.

East of the Minster, on Friars Lane, stands the Beverley Friary or Old Friary. Established in the early 13th century by the Dominicans, the first buildings were probably of timber. As the community flourished, additional buildings were added including guest quarters in the early 14th century. I have found several references stating that Chaucer mentioned the Friary in The Canterbury Tales, but I have yet to find the exact mention.

In 1539, the Dissolution of the Monasteries Act closed the monastery. Everything except the guest quarters was torn down. Those quarters, or ones built on the footings with leftover bricks, have remained in use since then.

Recent restoration work found a 15th-century wall painting and a paneled room that dates to the late 16th or early 17th century. These can be seen inside the Friary.

I have set the prologue to The Stonemason’s Secret in the Friary. I also added a medieval monk’s journal to the items found during the most recent restorations. The release of the journal’s translation is what triggers the events in the book.

I visited the Friary during my stay in England, even attending a concert there during the Beverley Early Music Festival in 1989. Today Beverley Friary is a hostel, so you can stay in the Old Friary on your visit to Beverley.

A few blocks north of the Minster on a triangular piece of land between Eastgate and Highgate is Beverley’s original market. Originally larger in size, it shrank as shops and buildings were erected around it. As the other market on the north side of town began and grew, this market became known as Wednesday Market.

The Market remains in a smaller size today, the area surrounded by shops and restaurants. I walked through Wednesday Market many times on my way to the Minster for research.

In the 12th century, a new market grew north of town. Known as Saturday Market it became the primary market in Beverley and is still used today. The Archbishop of York was the Lord of the Manor of Beverley and had the right to charge tolls on the market stallholders. Toll Gavel, the street that leads to the market from the south may have been where the tolls were charged.

The Market was where I saw HRH Diana, The Princess of Wales do a walkabout in 1988.

St. Mary’s sits on the north side of Beverley, near the north end of the Market and inside the North Bar. It began as a chapel dedicated to St. Mary and in 1269 became the parish church. As a daughter church of Beverley Minster, it was adopted as the parish church by many of the craft guilds in town.

Cruciform in shape, it is 197 feet long with aisled nave and chancel, transept, and crossing tower.

A rebuilding campaign began in the late 13th century. Halted in the mid-14th century by the Black Death, it resumed around 1400 when the west front was added along with a clerestory to the nave.

In 1520 the tower collapsed and was rebuilt. Those who gave money for piers of the north arcade are noted on hoodmold stops. Among the donors was the minstrel guild, who are represented by the 5 minstrels on a corbel against the pier. The minstrel guild was still a prominent and wealthy part of Beverley into the 16th century. Take this virtual tour of St. Mary’s to see the interior features.

Notice Minstrel Piller is painted bright colors? That’s how most carvings were decorated in the medieval period. Try to imagine the minstrel carvings in the Minster painted a similar color scheme, which they were believed to have been. It would give a very different look to the Minster interior.

Another interior feature of St. Mary’s is the painted wood ceilings dating from the 15th and 16th centuries. Stars on a dark blue background are in the nave, while the Ceiling of Kings is over the main chancel. Forty kings of England are depicted, however at the time it was made, there weren’t yet 40 kings of England. Thirty-six are actual kings while 4 were made up to complete the set and fill the space.

One fun carving to seek out is a rabbit on the frame of an inner doorway leading to St. Michael’s Chapel in the Sacristy. Carved about 1330, it is thought he represents the messenger hare from 13th-century fable by Odo of Cherinton. What makes this carving so interesting, however, is its connection with literature.

Charles Ludwig, better known as Lewis Carroll, visited St. Mary’s several times in his life. There is speculation that the carved rabbit was the inspiration for the White Rabbit that leads Alice down the hole to Wonderland.

Also worth a look are the misericords under the choir stalls.

Though the Minstrel Pillar didn’t figure in my thesis research, being carved 200 years after the minstrel figures in the Minster, it was always fun to visit the church and take in the brightly painted interior.

Beverley was not a walled town, but by the 13th century several formal gateways were in place to control attacks on the city. The North Bar is the only surviving one.

The Bars also provided a way to collect tolls for those wishing to enter. In the 15th and 16th centuries they served as a viewing gallery for the town governors during Corpus Christi Festival plays.

In 1409 the North Bar was rebuilt in brick then renovated in the 17th century.

The brick Bar abuts buildings on both sides. The north side has buttresses on either side of the central archway while above the center point is a carved stone cartouch of a coat of arms.

The North Bar is still in use, but instead of paying tolls, you have to wait for a traffic light to allow single-file auto traffic through.

Walking through Beverley you will notice many street names that have origins in the medieval town. Some are obvious – Friars Lane is where the Friary is located – while others aren’t known. Here’s a sample:

With so much to see in surrounding areas, it would be easy to give Beverley a miss. If you are interested in medieval history and architecture, please plan to spend a day or 2 there and see the wonderful buildings and sites from Beverley’s medieval past. 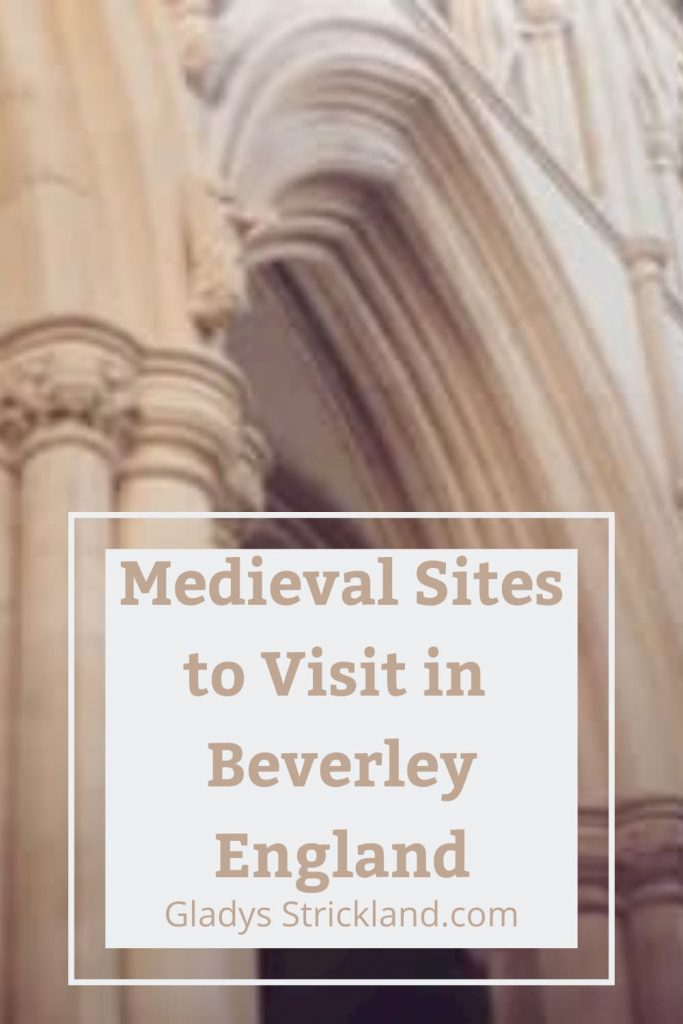 2 thoughts on “Medieval Sites to Visit in Beverley England”