The Stonemason’s Secret, my forthcoming novel, follows the adventures of art historian Sarah Walker. While doing research for her dissertation, she discovers mysterious symbols carved on several of the minstrel figures in Beverley Minster. She has to find the clues, figure out how to read them, and recover the powerful Cup of Jamshid before the remaining members of his Guard can claim it.

The clues carved on the figures are fiction which I created for this story. The Cup of Jamshid is an ancient Persian legend and there is no evidence that it existed. The medieval minstrel figures are real and form the largest collection of carvings of medieval musical instruments in the world.

I discovered the figures while living in England in the late 1980s. Needing a topic for my master’s Degree thesis I explored Beverley Minster, 10 miles down the road. Seeing the minstrel figures and learning they were not well researched made them my ideal topic.

How many carvings are there and where are they located?

There are carvings of figures with musical instruments throughout the Minster. Most date from the 14th century.

Most of them (24) are on the molding label stops about 6 feet from the floor and measure about 18 to 24 inches in length. Carved during the 2nd quarter of the 14th century, they were damaged during the Dissolution of the Monasteries in the 16th century. Many have had parts restored, yet much of the original carvings remain. Secular figures are rare in medieval art, especially in a church; a large number in relatively good shape provides a wonderful record of medieval instruments, playing styles, and clothing.

Across the nave, there are three badly damaged figures on the south aisle label stops. So little remains that we can only assume they were similar in style and subject matter to the north aisle figures.

2. The central nave has 18 figures placed at the top of the arcade columns.

These figures are a mix of angels, elders, and secular musicians, and are more typical of what is found in medieval art. I believe they represent figures from the Mystery Plays which were performed in Beverley. These figures date to the same time as the north aisle figures with some scholars believing they were completed first.

3. Two tiny figures of musicians are on the Two Sisters Tomb. Sitting between two nave piers on the south side, it dates from the 14th century.

4. Seven figures playing instruments, mainly angels, are on the canopy of the Percy Tomb.

The tomb, on the north side of the choir, was built in the 1340s. Topped by an ogee arch canopy, one of the finest examples of Decorated carvings in England. It remains almost intact which is rather miraculous considering the damage to the north and south aisle figures.

5. Five figures of musicians decorate the reredos, the decorative screen behind the altar.

These can be observed from the retrochoir: two in the vaulting and 3 on the arcading. These date to the 1330s.

6. Seven carvings of musicians and instruments are on the misericords in the choir. Five of them are animals playing instruments and two are musicians. These date to about 1520.

Misericords are hinged wooden seats in the choir stalls. When turned up, they provide a ledge to lean on during services. The carvings are underneath the ledge.

Why Feature the North Aisle Minstrels?

Of all the minstrel figures in the Minster, why did I pick the ones along the north aisle to put the clues on?

From a practical standpoint, they are the easiest to access. I can imagine that someone in the 1340s could have pulled up a small ladder and reached around the figures to carve clues on the back. This also gives my protagonists easier access to them as they hunt for clues. All other carvings are too high, too small, or in the case of the south aisle figures, no longer exist.

From a personal standpoint, this is the series I spent the most time viewing, again because they were so easy to access. After spending hours walking the aisle and looking at them I want to share this treasure with others through my fiction.

Could Clues Actually Be Carved On Them?

Who knows? I never found a mention about anything carved on the back of the figures during my research. While they do extend out from the stone they are carved from, there is still not a lot of room back there. Though it has been 30 years since I’ve seen them in person, I do believe that it might have been possible for a medieval mason to climb up and carve in the rough symbols as I describe in the book.

Who Carved the Figures?

While we don’t know the names of all the masons who may have worked on them, we do know who the Master Mason was. William de Malton was born in Huggate and worked at York Minster and St. Andrew’s, Bainton before going to Beverley. He was appointed Master Mason at the Minster in October 1335. His mason’s mark (a double X) and stylistic elements from York Minster be found on the north aisle in Beverley Minster indicating he did work there. I have not found a reference to when he actually died which allowed me to create one that fit the plot of my book.

If you are in Yorkshire, please consider stopping at Beverley and visiting the Minster. It is a wonderful medieval church the size of a cathedral and filled with carvings, tombs and other works from the early medieval period and beyond. The town and Minster are not as crowded as York making it easy to roam around and take in the sights. But if mysterious clues are ever discovered on the carvings, that would change!

Have you visited Beverley Minster? Did you notice the minstrel carvings? If so, what did you think of them? 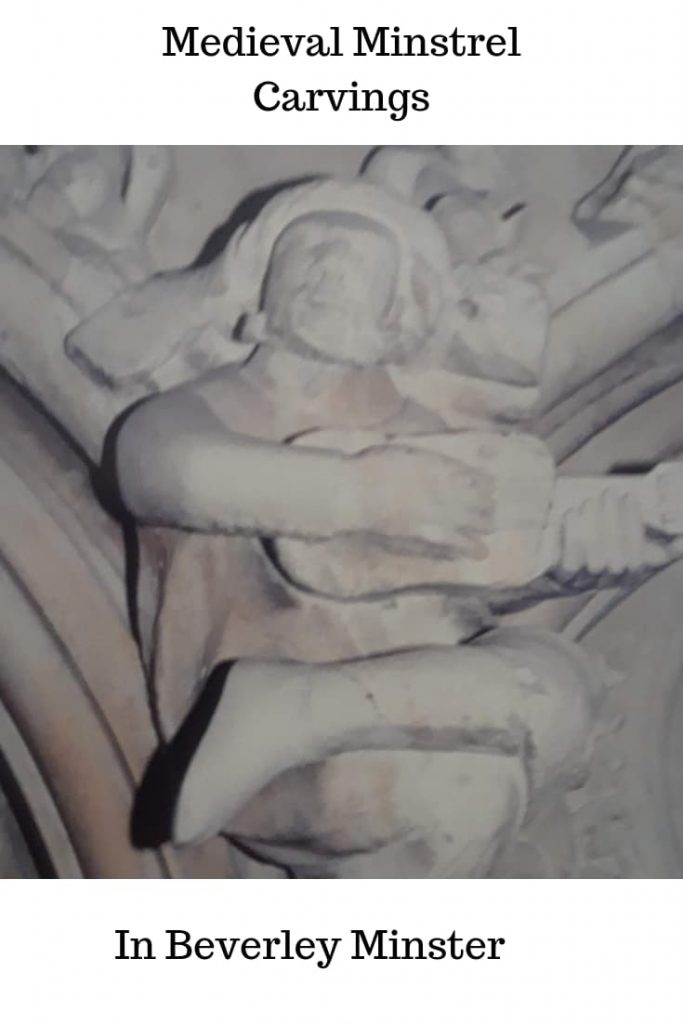