Thinking of participating in NaNoWriMo? Below I share my experience of doing it for the first draft of The Stonemason’s Secret.

NaNoWriMo stands for National Novel Writing Month. The goal is for participants to write 50,000 words on their novel during the 30 days of November. That averages out to 1667 words a day if you write every day. For anyone having trouble making progress on their book, NaNoWriMo provides the goal, the time-frame, and plenty of encouragement. There are stories of writers who took the work they did during NaNoWriMo and turned it into a published book.

I finally had an idea for a novel. I began creating characters and an outline but wasn’t making much progress. I spent more time researching settings and historical information than writing. I needed to jump-start my novel and participating in NaNoWriMo sounded like a good way to do it.

I signed up in August then spent September and October getting the backstory in place and developing the outline. By mid-October, the story in my head was growing and I even started writing the prologue and first scenes. These words did NOT count in my NaNo total. Reading back through them let me see how flat my writing was, how much descriptive information needed to be added. This was good information to know as I went into NaNoWriMo.

November 1st arrived. I got up that morning, made a cup of tea, opened my tablet and wrote. By the end of two writing sessions that day, I had 1687 words. I was thrilled – I had met and passed my word-count target. I also found a writing routine that worked for me, so each day I got up and wrote. Some days I was able to get in a second writing session. Most days I went well past my target of 1667 words adding to the cushion I began on day 1. On November 25th, I passed 50,000 words. I conquered NaNoWriMo with five days left.

Here are my thoughts on my first NaNoWriMo experience.

I developed a daily writing habit that helped me get the first draft of my first novel done.

I learned a writing routine that worked for me – get up and write first thing each day, before anything or anyone can pull me to something else. I still prefer to do this, but it doesn’t always happen. When it does the rest of the day seems to go smoother, knowing I have written that day.

I always thought of myself as a planner, needing everything outlined and in place before I could write. Turns out, I have a bit of pantsing in me. I still want to have an outline, and at times it needs to be quite detailed, but I also learned to let the story take me in other directions.

Getting up and writing first thing in the morning meant I had to give up other morning routines – no journaling, no reading – during November. By the end of the month, I realized how much I missed being about to do both of them regularly.

I realized cannot maintain that kind of schedule long-term. I need time off. Or some time away from writing to work on my plot.

I also realized that if I get stuck on my plot, I am better off sorting that out rather than skipping to come back to later. I got to a place in my novel where I was stuck. I knew where my characters were going to end up, but not how to get them there. So I skipped that section and kept writing from where I knew they would be. When I later worked out the sequence, they weren’t where I had planned, and I had to rewrite much of the book from that point on. It would have been better to have stopped, worked out that section, then resumed writing. While I wouldn’t have finished by the end of November, I would be further along with the edits now.

What I Learned About My Writing Process

I love the idea of writing sprints – aiming to get a certain amount written in a set amount of time – but I’m not sure that 30 days is right for me. I think what works better is to plot out my novel until I come to a section I’m not sure about. Write the part I plotted. When I finish that plot out another section. Repeat as needed until the draft is finished.

I also see the value in periodically reading through what I’ve already written, to see how the story is flowing up to that point. Any obvious holes or issues can be addressed then, leaving me with a much cleaner draft. While I know the risk is getting caught up in revising rather than writing, I want to try this and see how it goes.

Will I Do NaNoWriMo Again?

I don’t know. If I’m having trouble getting through a draft, doing NaNoWriMo (either in November or on a time schedule I set) could get me over the hump. I had hoped to get the revised draft to an editor this fall so I could fast draft the next book in the series. But I am learning as I go, and revisions are taking much longer than I anticipated.

While the NaNoWriMo schedule may not work for me, I am so grateful that I did it. Not only did I show myself that I could write over 50,000 words in a month, I learned more about the writing process that works best for me.

If you are considering participating in NaNoWriMo I encourage you to go ahead and sign up. Even if you don’t get 50,000 words written, you’ll have more than you would have otherwise. For those wanting support, there are groups, both in-person and online. Several local groups set up “write-ins” where members meet and write together for moral support.

Let me know how it goes! 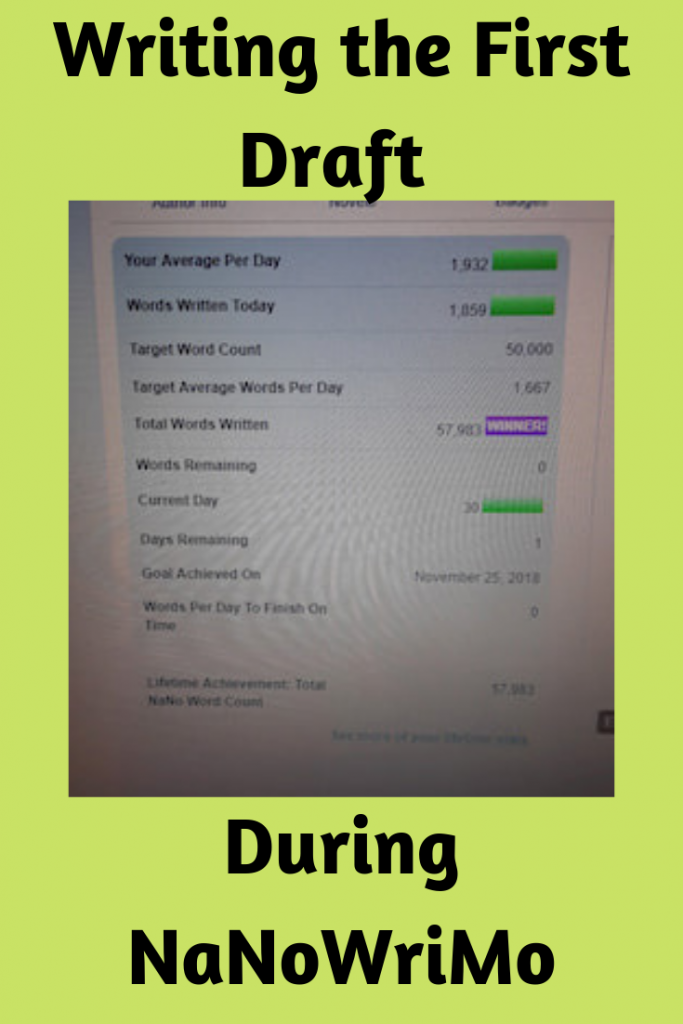 3 thoughts on “Writing the First Draft During NaNoWriMo”