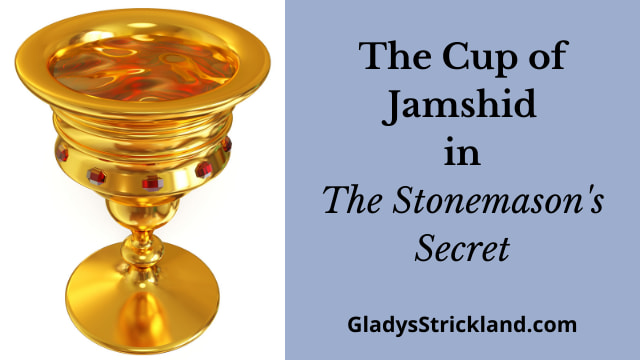 The protagonist of every story needs to seek an object of desire. Learn about the artifact at the center of The Stonemason’s Secret, and the facts and fiction in the book.

The Object of Desire in Fiction

The protagonist of every fiction book searches for something. It can be a physical object, a relationship, a resolution to a problem, or a combination of things. No matter what it is, the search drives them throughout the book.

Often, the antagonist wants the same thing. The tension created as both parties try to get to the object of desire first keeps readers turning pages.

For The Stonemason’s Secret object of desire, I wanted an artifact of historical significance. I also wanted to use something different or find a unique twist on a more familiar object.

The Cup of Jamshid

I began with an internet search for legends about ancient objects. The results pulled up some well-known artifacts, such as the Holy Grail and Jason’s fleece. I continued reading the list and came across the Cup of Jamshid.

Have you ever heard of the Cup of Jamshid? I hadn’t, which met my criteria of finding something different to write about. As I researched the Cup, I could not find a lot of information about it. I gathered as much information as I could find online and created its history as best as I could.

According to the legend, The Cup of Jamshid was a cup of divination. There is no record of how it came into existence, but it is recorded as belonging to Jamshid, the fourth ruler of the Pisdadian Dynasty of ancient Persia.

I found no mention of what the Cup was made of. Descriptions sometimes describe it as a crystal ball or crystal globe, but images of it are often a golden cup. The legend says seven rings circled it. There are some scholars who believe the legend of the Cup of Jamshid was a precursor to the legend of the Holy Grail.

What makes the Cup of Jamshid so important is that it would fill with an elixir. Drinking the elixir would give you immortality, while looking at it would reveal deep truths, giving the viewer omnipotence. Quite a powerful combination. That is why I thought it would be the right object of desire for my book.

see reference notes at the end for sources

What Happened to The Cup of Jamshid?

According to the legend, Persia prospered during the first half of Jamshid’s reign. Many technological advances occurred, and the people were prosperous. During the second half, however, Jamshid said all good things came from him and not their god. This prideful behavior turned the people against him. He faced challengers to his throne, and Zanhak eventually defeated him. Jamshid then fled halfway around the world with Zanhak following and murdering him.

I found no mention of what happened to the Cup after Jamshid ouster. There are a handful of mentions of the Cup throughout Persian literature, but nothing about what became of it.

Which is where I created the story of how it moved from ancient Persia to East Yorkshire.

What I Made Up for The Stonemason’s Secret

I love to read the notes at the end of adventure/thriller novels that differentiate what is fact and what is fiction in the book. What I listed above are the facts about the Cup of Jamshid, as best as I can find. Below is the story I created telling the rest of the story of the Cup. I’ve tied events related to the Cup to historical events where I could.

For The Stonemason’s Secret, I say soldiers loyal to Jamshid hid the Cup in Persia, keeping it safe until Alexander the Great conquered the area in the 4th century BCE and took it as a spoil of war. He kept it with him for several years before sending to his capital of Pella. In 168 BCE, conquering Roman soldiers found it and took it to Rome, where it was placed in a storeroom and forgotten. (Think of the ending scene of Raiders of the Lost Ark) Later, a stonemason was searching in the storeroom and found the Cup. Examining it, he saw the elixir and realized the power it possessed. Not wanting the Roman Emperor to gain access to it, he recruited other stonemasons to help steal the Cup of Jamshid and take it out of Rome.

This group of stonemasons became known as the Keepers. As members aged, they recruited new ones to carry on their cause. They protected the Cup for centuries, hiding it, then moving with it to keep it safe from others. Eventually, some of the stonemasons ended up in England with the Cup. William de Malton, master mason at Beverley Minster, joined the Keepers.

I also created the Guard, a select group of soldiers loyal to Jamshid. Even after he lost the throne and fled Persia, they remained loyal. They hid and protected the Cup, keeping it safe in the hopes Jamshid would one day return. When Alexander the Great sacked the city, his soldiers took it. The Guard’s mission then changed to one of recovering the Cup and returning it to its rightful home.

The Guard of Jamshid pursued rumors of the Cup through Europe, and over the centuries came close to it many times. It was in the 14th century that they caught up with the Keepers.

William de Malton had moved the Cup, and to keep the Guard from finding it, he placed clues on the medieval minstrel figures in Beverley Minster. He tried to get word to other Keepers about where the clues were, but the Guard captured and poisoned him. The location of the Cup of Jamshid died with him.

With the Cup missing, the Keepers mission became one of finding the Cup while also keeping knowledge of it secret, to prevent others from finding it. The Guard of Jamshid also continued searching for the artifact, still determined to reclaim it for Persia.

When Sarah Walker, the protagonist in The Stonemason’s Secret, finds the clues on the minstrel carvings, she must try to figure out where they lead while keeping one step ahead of the Guard of Jamshid.

While I used historical events and places, what happened to the Cup of Jamshid is fiction. Although who knows, there may have been a real Cup of Jamshid. Maybe it ended up in England, lost for centuries. Maybe there are clues on medieval carvings leading to the Cup, just waiting to be discovered. 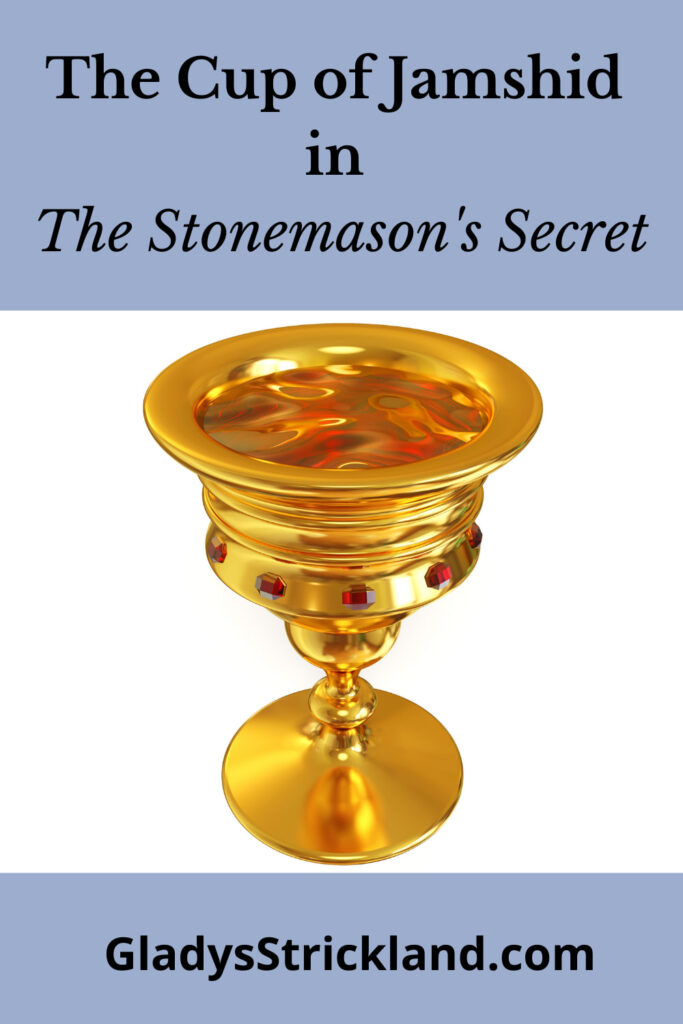